Music flowed from every corner of the Melby home in Starkville, Mississippi.  On any given day you could hear Hannah (age 10) trying to conquer her latest fiddle tune on the back porch while Caroline (age 6) concentrated on her new classical piano piece in the living room. The two girls were not the only musical ones in the family. Their mother, Cindy, also played classical piano and was a music teacher, while their dad, Pete, entertained with a harmonica, jaw harp, and gospel style piano. The family of four often played gospel numbers in their home church on Sundays. 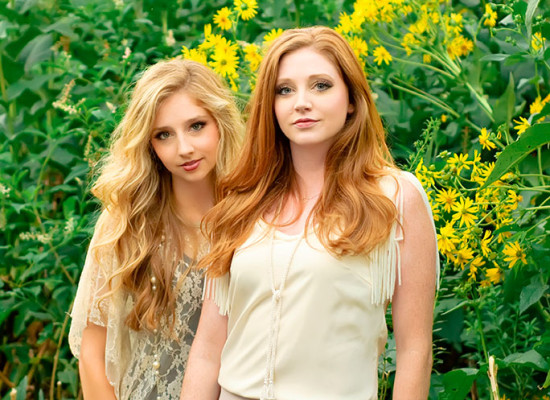 Hannah joined her first band when she was in the fourth grade. Her fiddle teacher, Norman Mellin, initiated the group as a way to get his students to grow as musicians. Their string band consisted of two fiddles, an acoustic guitar, and an upright bass. The band was interestingly named The Goat Ropers. They often performed for square dances, Mississippi State University events, and bluegrass festivals around their home state.

It was an exciting time for Hannah as a teenager. She was traveling on the weekends performing for live audiences and winning fiddle contests. All the while, her little sister Caroline, who was in elementary school, was competing in Bach Festivals and other classical piano competitions. Caroline would usually tag along to watch the weekend string band performances. This continued until she was ready to join her sister on stage.

Caroline began taking mandolin lessons from the legendary “bluegrasser”, Mr. Larry Wallace. Within the same year of learning the mandolin, Caroline played her first show with the Goat Ropers at a live broadcast radio show.

The Goat Ropers morphed into a new band with a new name. Nash Street, the name of the street the girls grew up on became the new name for the group. Nash Street flourished in the bluegrass world and even some country venues and festivals in the southeast. The band shared the stage with many national acts such as Tim McGraw, Faith Hill, Martina McBride, Eric Church, Chris Young, Little Big Town, The Grascals, Charlie Louvin, Mountain Heart, Jeff Bates, Billy Gillman, and many more nationally recognized acts.

In 2008, Nash Street competed in the Colgate Country Showdown. They followed the competition all the way from Philadelphia, Mississippi, to Nashville, Tennessee, where they won the grand prize of $100,000 at The Ryman Auditorium. LeAnn Rhimes hosted the show and presented them with the prize. Their touring broadened to included venues and festivals in the Midwest and eastern half of the country.

In 2010, the five band members moved to Nashville to follow their dreams. Not long after the move, the band changed once again (as bands do). This time, Hannah and Caroline decided to continue as a sister duo with a new name: HanaLena. This name originated from the girls’ childhood flower growing company where they sold zinnias to local restaurants and businesses. They took Hannah’s name and Caroline’s nickname (Lena) and came up with HanaLena. As HanaLena, the girls recorded a five song EP with Grammy Award Winning Producer, Bil Vorndick. The EP featured songs written by the sisters, some written by Nashville songwriters, and an old classic song. The sisters have  continuously toured with their band for many seasons and for many seasons to come. They wouldn’t have it any other way.

Hannah and Caroline’s latest endeavor is the authorship of their book, Recipes and Road Stories. The book is a combination of funny and heartwarming short stories about their musical journey along with recipes they gathered from people they encountered while traveling. They went on a book tour that spanned four states and many cities when Recipes and Road Stories came out. It was a grand new adventure for the girls.

Hannah and Caroline still reside in Nashville and tour from the city. They write songs during the week and collaborate with the many talented musicians surrounding them in the city. The sisters have an expansive history full of diversity and excitement, and an undoubtedly entertaining future ahead.